Having filled in umpteen forms, endured what felt like the Spanish Inquisition, and assured the librarians that I had no
Liquids or pens, I finally got my mitts on the Beta III file. 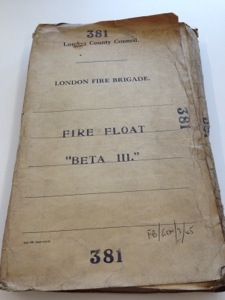 Ironically the file itself looked like it had been in a fire with a very yellowed, slightly scorched appearance. Inside, there was a chronologically arranged set of papers relating to the boat, mostly typewritten, paper thin correspondence.

Letters were mainly notes and records from the fire authority or messages to suppliers covered in spidery handwriting. 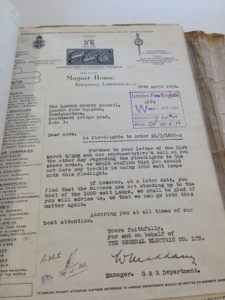 These were the days of earnest correspondence on elaborately headed paper to request quotes or spare parts rather than one click on amazon and next day delivery. I can report that tender documents in the 1930s were are boring then as they are today.

There were some documents and letters relating to the decision to commission the Beta III from Merryweather & sons of Greenwich and some detail about specifications. I found a few technical drawings and some rough sketches of individual parts but nothing really in the way floor plans or comprehensive drawings.

Rather pleasingly there were some press cuttings about the boat and her specifications dating from around the time of the launch. More of these later. 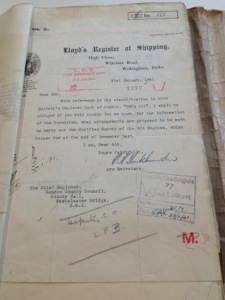 1 thought on “IN THE ARCHIVES – The Beta III File”