The first job on the long long long list of jobs is to get Beta III out of the water. This has been both much easier than I had feared and much harder. But, in both cases, not for the reasons I had thought.

It turns out that people hoik mega boats out of the water all the time and cranes, people and know how all exist to do this. Hiring a 150 tonne crane and a mega lorry is actually easier than hiring your common or garden rental car. No driving licence required. Slightly worryingly for anyone who has seen me park, they even let you manage the lift yourself…. left a bit…. I mean, right a bit…. oh shit…

What I hadn’t anticipated is bloody mother nature. The area where Beta III is moored is tidal which means that she can only be moved at a high tide over 3.6 metres. Preferably nearer 4 metres as they need to get the strops under (more on strops later). 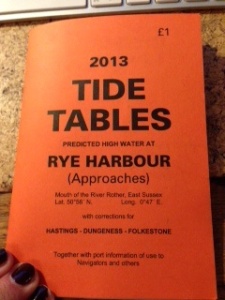 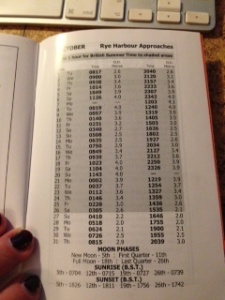 This only really happens twice a month. So, in a feat of logistical gymnastics, I need to hire the crane for a high tide day and get a 1950s engine to work and the boat to the wharf in time for it to be lifted. If I miss the tide or the engine fails, I have to pay for a mega bucks crane I never used while the boat stays in the water another month….

The boat here shows the 500 metres or so that it has to be moved. Looks close but I am sure that it will seem like a marathon.

UPDATE: some further advice from Ms F:
“PS. Low pressure systems, wind and rain also effect tides (especially if you’re in an estuary rather than on the coast properly). The book only predicts the effect of moon and sun. Worth bearing in mind if you’re planning on cutting it fine…”