Monday 2 December. Possibly the most stressful day I have experienced for a while. Fortunately all the finger-crossing, pleading and silent prayers paid off and Betty is now snug in the yard. It is easiest to explain how things went through a series of photos and even some videos. So here goes.

After checking in with the crane guys at the wharf I rocked up to find Betty in her usual position stuck in the mud. The weather is good, hardly any breeze, no rain but totally brass monkeys. 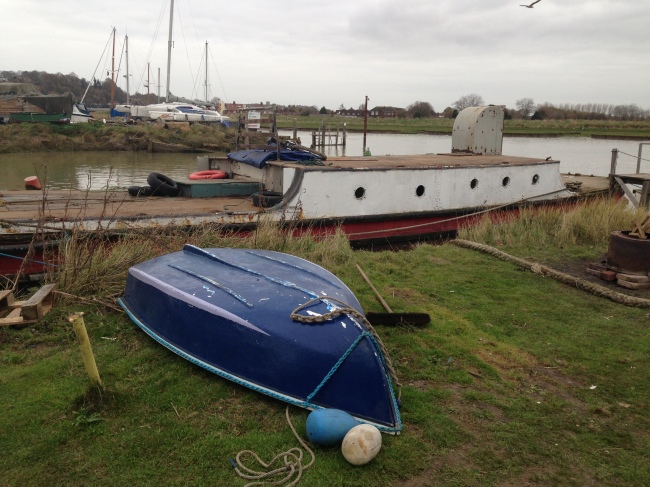 After watching the tide rise Job one was getting the engine started. It had been prepped previously but should in theory be good to go. There was a bit of a worrying moment where the batteries seemed to have failed but it was quickly up and running. I hadn’t anticipated quite how smokey it would be and there were moments where I was wondering whether we were alight.

High tide (a 3.9 metre tide) was at 10.30 and there was a lot of time spent a bit anxiously staring at the river bank. Betty definitely wasn’t moving away from the bank and, although afloat, wasn’t really going anywhere. She had been sat in the same position for so long that she had almost carved out a space for herself meaning that she needed to get up and over the mud to get into the main channel.

Captain Carl rocked up jumping from his work boat on to Betty to get the show on the road.

The first hero moment came soon after as the crew of the Walter George hitched up Betty to their boat and gave her a series of quite big tugs.

This was massively nail biting. On the first two attempts she really wasn’t budging. Not at all. I was visualising having to rive down to the wharf, tail between legs, to explain that the boat was stuck and the lift was cancelled and then being faced with the whopping lift bill….

Massive thank you to the Walter George for persevering as on the third attempt there was a massive pop and a squelch (or maybe that was the nerves getting the better of me) and Betty started rolling across into the channel.

(Please excuse my rather moronic commentary on the videos. Saying obvious things in a stupid voice is a very common reaction to stressful situations!)